Choose a color.
Close your eyes and picture the color.
Search your memory and your imagination for objects of the chosen color.
Write these objects down in the shape of a triangle.
Place one object in the first line, two in the second, three in the third:

Details:
Describe each object (or emotion or landscape or phenomenon) with a word, a couple of words, a fragment or perhaps a quote.

Advice:
Use A4 horizontal format or the so called landscape orientation for more space.

VARIATION
Write another triangular poem in another color. Continue with different colors, if you like.
Yellow, or violet, perhaps.

ANOTHER VARIATION
Write three triangular poems in different colors.
Make a triangle composition out of the three triangles. 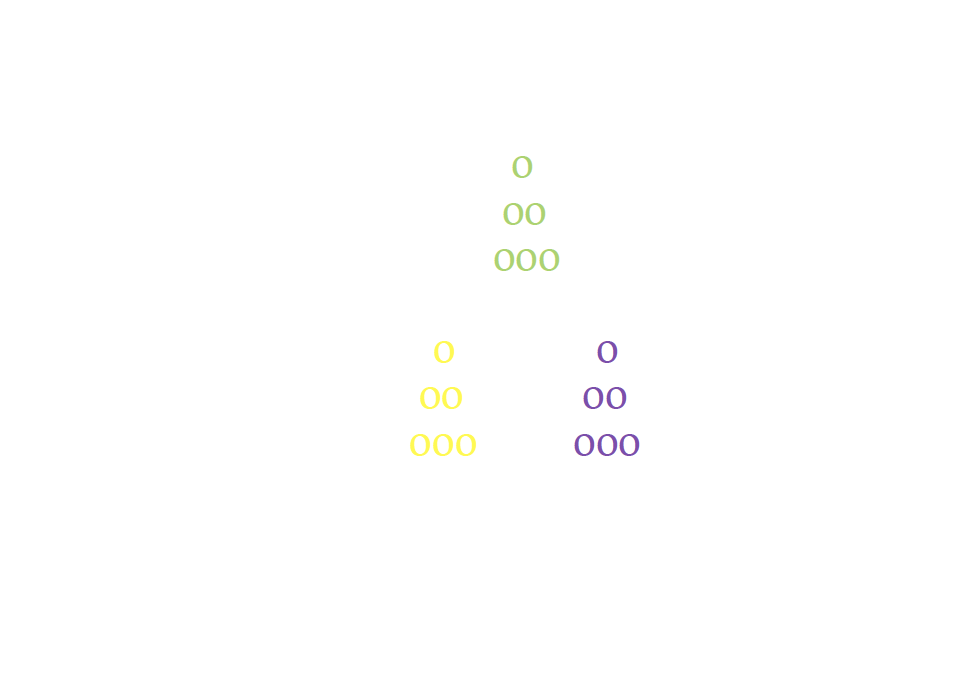 If you like, continue with more triangles and a bigger triangular composition. 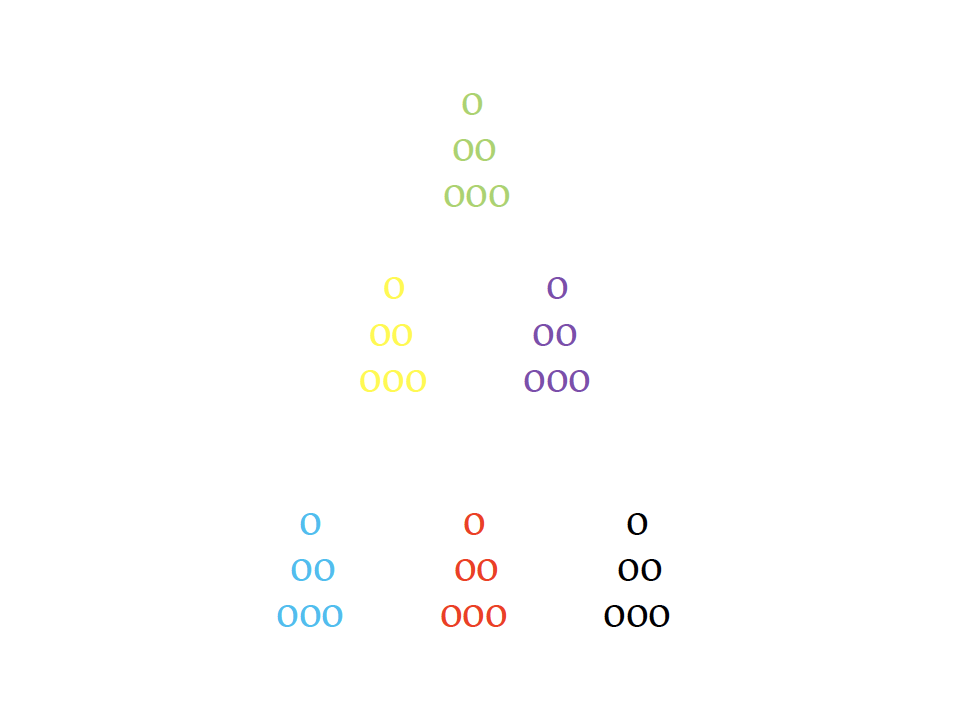 YET ANOTHER VARIATION
Choose the color that felt most important or relevant to you.
It could be the most exciting one, or the one that felt most safe.
The one that activated resistance, or the one that allowed healing.
It is, of course, entirely up to you.
Write a triangular poem in a color of your choice, and this time write as many lines as you have time, space or words for.
Remember, just add an extra object per line. 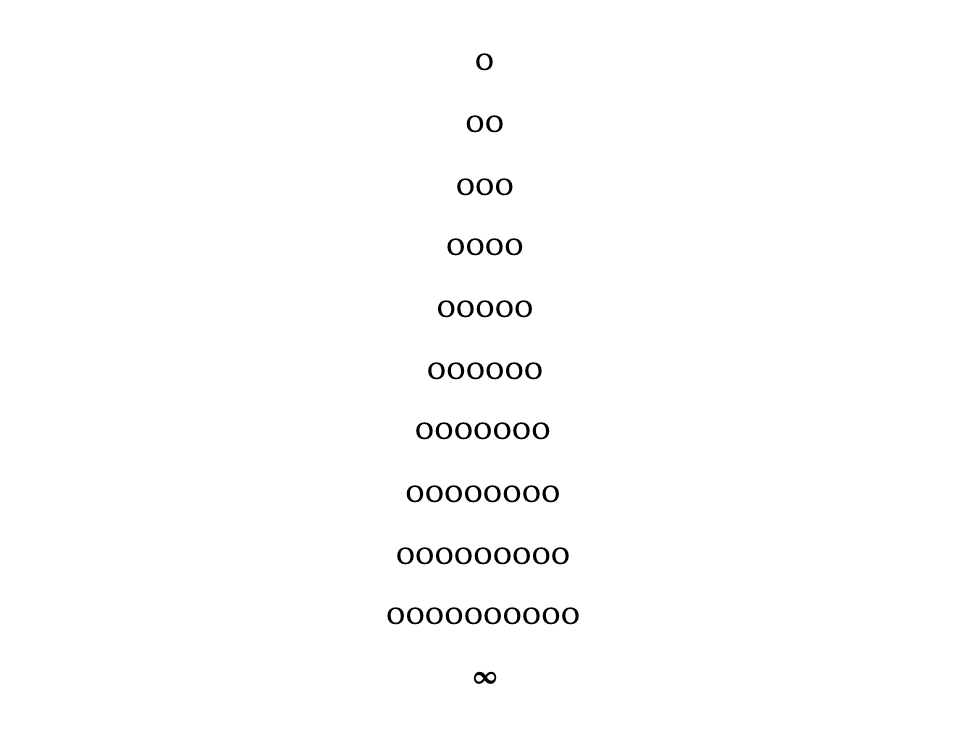 VARIATION WITH THINGS INSTEAD OF WORDS
Instead of using words, make a colorful triangular poem with things found in your home. 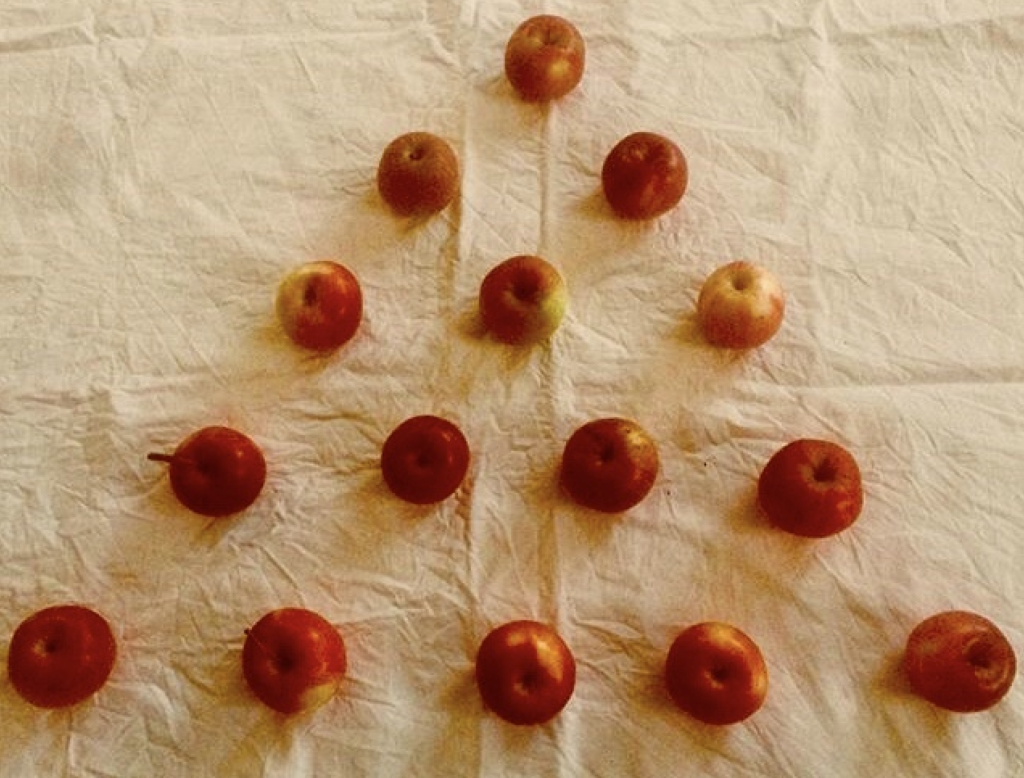 Take a photo or a screenshot of your colorful triangular poem made of words, – handwritten or written on a computer, – or things,
and post it on Instagram using #colorfultriangularpoems #1000scores @mettemoestrup.

The triangle is an old, mysterious, and yet very well-known shape, occurring in both nature and culture. In nature, triangles emerge everywhere – in geology, physics, chemistry and biology. We see it all the time in our daily life. As a sign and symbol in languages, religions, rituals, politics, math, medicine, UFOs, traffic, architecture, alchemy, and so on, the triangle has countless meanings, some of them positive, some of them ambiguous or even dangerous. In my poetry, I have worked with triangles for many years (the triangle numbers as a system, reclaiming the black triangle, etc.) without getting enough of this intriguing shape. Quite the contrary, I’m just getting more and more obsessed with the triangle, and so, with this contribution to 1000 SCORES, I wish to share my obsession with you. Creating colorful triangular poems is a way of getting in contact with the triangles of your mind and body. The combination of triangles and colors is, in my own experience, a fascinating and alternative way of remembering and imagining. Sometimes writing colorful triangular poems is helpful for finding courage, other times it’s soothing. And beautiful.

Commissioned by Burg Hülshoff – Center for Literature and 1000 Scores.

We use cookies on our website to give you the most relevant experience by remembering your preferences and repeat visits. By clicking “Accept”, you consent to the use of ALL the cookies.
Cookie settingsACCEPT
Manage consent

This website uses cookies to improve your experience while you navigate through the website. Out of these, the cookies that are categorized as necessary are stored on your browser as they are essential for the working of basic functionalities of the website. We also use third-party cookies that help us analyze and understand how you use this website. These cookies will be stored in your browser only with your consent. You also have the option to opt-out of these cookies. But opting out of some of these cookies may affect your browsing experience.

Any cookies that may not be particularly necessary for the website to function and is used specifically to collect user personal data via analytics, ads, other embedded contents are termed as non-necessary cookies. It is mandatory to procure user consent prior to running these cookies on your website.